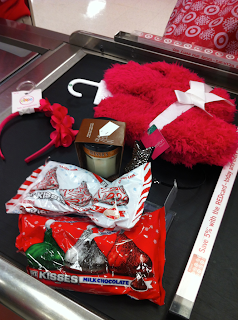 Yes...do to my glue-gun mistake I had to go back to Target last night to buy another pair of hot pink fuzzy slippers-
I made a special craft out of them to show you guys - but we had a craft-mishap- which I will fix, because you guys will love how they come out!

So, as we waited in line at Target...we were taking pictures with my phone to keep us busy while the lady in fron of us bought a lot of things and sleds- maybe she's going somewhere snowy because there's no snow here.

WHAT WE BOUGHT AT TARGET:
~hot pink fuzzy slippers
~a movie for Jordan for Christmas, which is hidden under the Hershey's kisses
~Hershey's Kisses - at my sister's request, because she want us to bake peanut butter cookies and put them on top
~Peppermint Hershey's Kisses - were not on the shopping list, but they looked yummy and said, "take me home with you"...so I did.
~A Mrs. Meyers Candle in Spice Cake scent - it smells so delectably delicious- I want to bite it.
~A pink ruffley headband for Alani and a sparkle star headband for me - even though they normally hurt my head after a while.

And right before we bundled up to listen to Christmas music and head to Target for the 245,497 time.
I took this picture and thought....
What if baby Ellie Bellie (real name Elyse), had been twins! ha ha ha 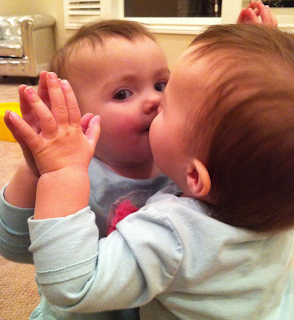 She was just getting real close to herself in the mirror.... 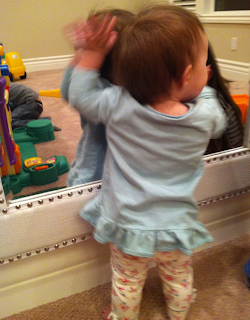 See, now you can see she's not a twin. Ha ha ha

YAY! It's almost Christmas.....
Best Compliment: My brother-in-law said, "It looks like you had your house professionally decorated for Christmas".
For Anyone that missed my holiday house tour, CLICK HERE TO SEE.