We made it- and a long-ish flight with kids... 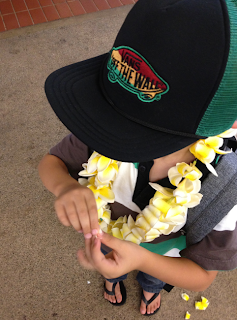 We made it! This was Blakey  in the airport as we waited for our bag to show up.
After a long day of travelling, lots of waiting in the plane- one flight we actually spent more time waiting in line to take off than we did in the air! ha ha ha 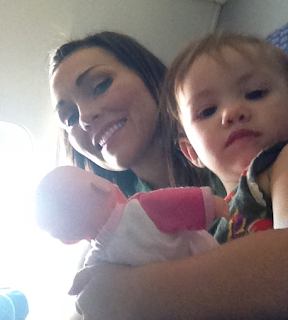 Here was a picture of me and Ellie and her baby doll,  on the plane, from Alani's angle...
Me, Blakey, Ellie and Alani had one row of seats....which was located right next to the bathroom doors and against the back wall...so we got the pleasure of seeing all the people line up next to our seats, smell, the "aroma" of the bathroom, which did NOT smell like the heavenly smell of our lei's...ha ha ha And the opening and shutting of the "lavatory" doors, which ultimately woke Ellie up from her nap. haha ha ha ha 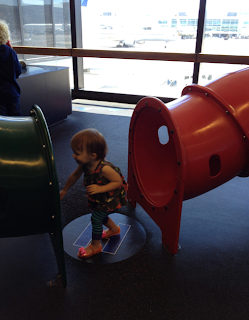 Thankful that the San Francisco aiport has these play areas for kids...Ellie and Blakey and Alani got to get some energy out before we boarded our plane for Hawaii- (where we spent almost an hour just waiting to take off, again! IT seems San Francisco has quite a bit of traffic! ha ha ha) 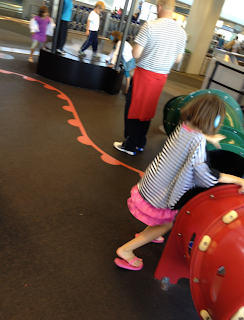 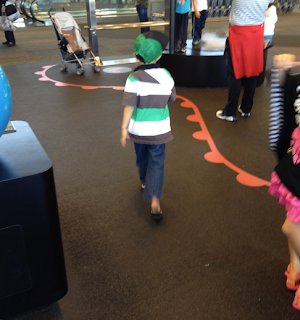 Not shown...Jordan and his friend, who happens to be our cousin, too...who is with us too.

Travel tip: for anyone travelling with a "lap baby"...any baby under 2, that sits on your lap for the flight- if you bring a little flat-ish, pillow, you can lay it across your lap for them to sleep on way more comfortably!

Anyone traveling with a baby knows, flying is not relaxing, like where you just get to sit back and read or watch a movie- you are bouncing, making faces, entertaining like crazy because you can't really get out of your seat and do anything! ha ha ha I was almost more excited to get off the plane than the kids! They kids did great, no crying from baby or anything...Jordan and Marcus (his cousin, who didn't get to sit together, or together with us- were super excited to get off too!

Off to go feed everyone breakfast- and yes, after we landed we stopped at Walmart for food and some supplies...ha ha ha They sell really cool Hawaiian stuff at their Wal-Mart!

Hugs from Hawaii (I can't believe I get to type that!), your kandee

Check out what I've got for ya on my main blog, HERE.
Posted by Kandee Johnson at 11:53 AM