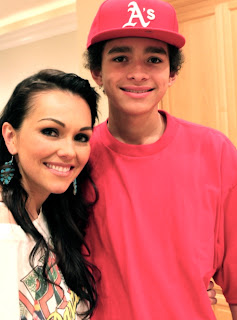 Me and Jordan, my birthday boy...who is so much taller than me it's scary.
(CLICK HERE TO SEE MY BIRTHDAY BABY PICTURES OF JORDAN)
He said for his birthday he wanted to have a bunch of friends over, to spend the night....so as I type this, Jordan's room is full of his friends.
5 pizzas were ordered to feed them.
Lots of milk glasses were filled to wash down their birthday cake.
And they all went to movies, while I finished baking and icing the cake. 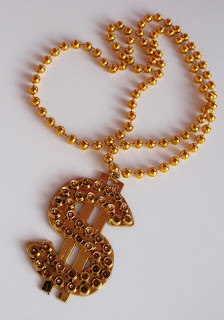 I thought it would be funny to buy big fake gold chains for all Jordan's friends for his birthday....and lo and behold, as I walked into Target the other day, near the dollar area in the front, they had these "gold dollar bling" necklaces in the St. Patty's day stuff! 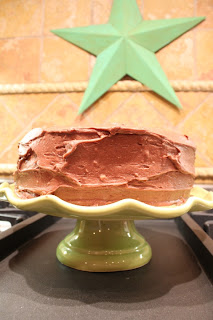 BEST COMPLIMENT OF THE NIGHT: After the boys started eating the cake one said:

"THIS CAKE IS THE BOMB!"
and another one said:

"MAN, THIS IS BETTER THAN THE CAKES MY MOM MAKES!"
and another one said:

"THIS IS WAY BETTER THAN THOSE CAKES IN  A BOX!" 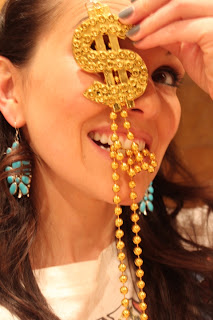 Jordan said the only way they'd all wear the "gold bling" necklaces I got them, to the movies, was if  he could pick out what I would wear, and it would all be all clothes from his closet. ha ha ha ha He should know by now, that I would probably say "ok, I would"! 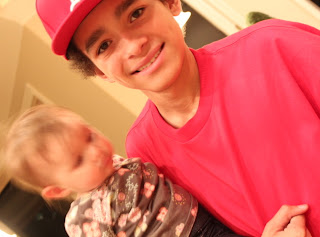 Jordan may be 15 now, but he's not too cool to still hold his baby sister. He picked her up and took her to go meet all his friends when they came over...he's such a good big brother.
And Blakey was in heaven to get to hang out with the guys in Jordan's room! He even ate 3 slices of pizza with the boys at the table. He was so excited to get to sit with them.

And when Blakey gave Jordan his present, which was a box full of some of his matchbox cars- Jordan was so sweet and told him they were "so cool!" and his favorite cars. And Alani remembered that Jordan had said how he liked the game Clue, so she picked that out to give him. And Jordan and one of his other friends said, she made it a party by giving him that! She was so excited!

going to get another slice of chocolate cake, your kandee