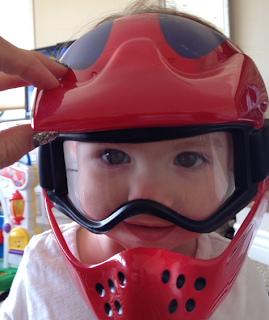 Blakey has a little fake helmut mask...and he put in on Ellie today....I laughed so hard, when they both stood in front of me laughing.
These little love bugs melt my heart into a puddle, all day long. While Alani and Jordan are at school..Blakey and the baby play together so cute. They laughed and smiled at each other as we played school bus driving to pick Jordan up from school. 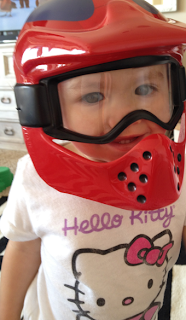 Blakey...came out with his "pretend motorcycle"...and said, "Everybody loves my motorcycle. They take videos of it....pictures of it......"
And the baby and Blake are the cleanest people in the house....not only did they have their cozy-before-bed, night time bath (which both of them fell asleep after about 15 minutes after their baths...but they both had day time play baths too! Which were also, right before nap time!)

Afternoon cool treat: I made the Frozen Hot Chocolate from Serendipity. Jordan instructed me on how to perfectly blend the ice to his liking.

Alani made a request for pizza for dinner- request was granted.

BEST PART OF MY DAY: when I asked Jordan how he did on his history test. You see I "helped", when after he did his study guide, I made a "rap" for him to remember the dates of events around the civil war example:

"In 18.....54....
the Republicans hit the (dance) floor..."
-this lyric was to help him remember when the Republican Party was formed in 1854...made up of anti-slavery activists.
I won't bore you with the whole study guide...but that was the best of my material! ha ha ha
and guess what!?!?
He said it did help, and that it was the first question on his Civil War Test!

I should write raps for all his subjects! ha ha ha ha

I could be like the new, School House Rock! ha ha ha ha

peace out, K-dazzle and her education-rhymes...ha ha ha ha
(picture me in a big gold chain and teacher glasses)

CLINCKITY CLACK RIGHT HERE TO SEE WHO'S BIRTHDAY IT IS...and made me cry writing this....awww

Posted by Kandee Johnson at 9:22 AM