Some people really think I named Elyse, "Cupcake" and think that's strange...yes, Cupcake might be a "a little out of the norm" for names..but not that weird.
And with a name like Kandee, you bet your personalized name mug that I got teased...
countless: "kandee, can I have some candy?"...and then on to high school where I was always disgusted at how teenage boys could use my name in gross teenage boy-comments.
So when I set out to name my little ones...I carefully thought of every way a name could be shortened, teased, or made fun of before I even thought of adding it to a "baby names" list. 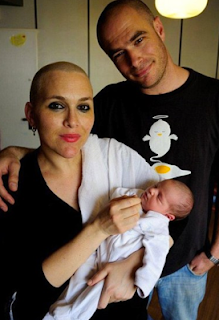 Meet Lior and Vardit Adler,  nice looking parents, that seem creative and modern thinking.
So creative that they were inspired by FACEBOOK to name their baby after the like button. Yes they liked the LIKE button on facebook so much they named their baby after it.....meet little, Like Adler.
Like has an older sibling named Pie, which makes Cupcake seem not so crazy as a name option. ha ha
(actually I bet "Like" sounds very exotic in another language beside English)

And don't forget little, Facebook Ibrahim, who was named by her dad, who was so impressed with FACEBOOK's power to help bring an end to Egyptian President Mubarak's reign, that he wanted to name his baby Facebook.

It could be funny...a kindergarten class in 5 years:
TEACHER: Google I told you to leave Facebook alone. Youtube would you like to bring your toy up for show and tell as soon as Twitter is done showing us her new toy. And thank you, Yahoo, for using your inside voice.


with a name like Kandee...you may not like it when you're little...but after you survived elementary school and high school...it's awesome...people hardly ever forget my name...
and you can bet you'd never forget Facebook Smith...ha ha ha