What Happens When You Run Out of Eggs..... 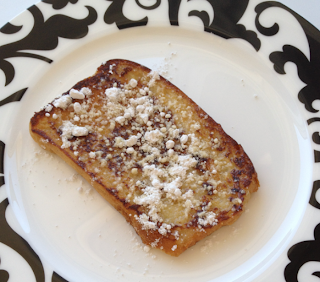 What happens when you run out of eggs and want to make French Toast?
You make egg-less French Toast!
ha ha ha ha

I had never made French Toast without eggs before. But myself, being one that is not only grossed out at the thought of Salmonella, but I just have always been semi-grossed out by raw eggs. And I DO NOT like French Toast that looks like it has fried egg stuck on it from eggy batters. So I though, "hey this might be my new way to make French Toast!"

And it came out delicious! I actually like how it came out better without the eggs. It had an even more cripsy edge factor, without all the eggy-ness I've never liked!

And the kids loved it even more than our normal, egg-filled French Toast!

And for those of you wondering where the syrup is....
we are a strictly butter and powdered sugar-topped French Toast Family. The butter mixed with the powdered sugar makes this almost, icing-like treat on top, that Paula Deen would love too!

Now if I can figure out how much of everything I used to make the French Toast "Batter"....I will post my "Egg-less French Toast Recipe". Because I don't think I'll ever make Frech Toast with the eggs again!
ha ha ha ha

buttery powdered sugar, kandee
Posted by Kandee Johnson at 9:05 AM