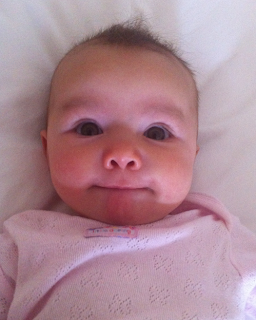 Baby's new funny face....
cracks me up!
I'm pretty sure this is the "face of teething"....sucking in the bottom lip to put a little pressure on those gums!
Teething usually starts around 4-7 months
*signs of teething:
*lots of drooling
*fusssier than normal (you'd be too, if your mouth hurt! ha ha)
*hard time sleeping (because of the pain)
*trying to bite or suck on things more than normal
AND IF ALL THAT WASN'T ENOUGH...

* because of all the increased spit production...they can have a  little diarrhea from swallowing tons of saliva.
*they can run a slight fever
*they might will have a runny nose

TEETHING TRICK: you can get a washcloth, put some water on it, ring it out so it feels dry..and it feels great for them to bite on.

My pediatrician warned against things like Anbesol, that numb the gums- he said they salivate (create spit) so much when they are drooling that the numbing agent will not adhere to the gums, and most times can cause babies to numb the throats as they swallow it, which has causes many babies to choke and even die.
And I bought one of these:

the LIFEFACTORY TEETHING RING-  ($6.99) A 100% silicone, teething ring- free of bisphenol-A (BPA), phthalate, and polyvinyl chloride (PVC) free. They are softer than all the hard things they label "teething toys" that just hurt babies gums even more. And you could wear it as a bracelet..ha ha ha! 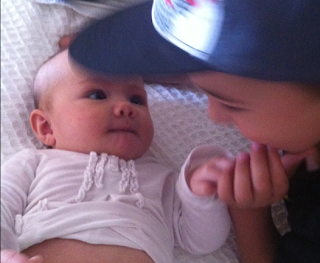 making her funny face a big brother Blake...
SO... if your little one has been unhappier than normal...
*isn't sleeping like normal (which when you're a baby, it seems there isn't a normal...ha ha ha)
*is drooling like a little fountain
*trying to bite and/or suck on their fingers or hands (or maybe yours)
Get ready...It breaks my heart when they are teething...
and it takes months..so get ready to be extra lovey, cuddly, get a little less sleep, and have a freshly washed finger for them to bite on! (ha ha ha)

so if you have a little tooth-gardener...just snuggle them more, maybe put cooler clothes on them if they feel "fevery", and have lots of patience and understanding for all the pain your little baby is going through...

lots of hugs and teeth...your kandee
Posted by Kandee Johnson at 9:25 AM